Oh, my goodness! It's my first Sat Spanks, and our book comes out in less than a week. I'm excited and terrified!

It was hard to choose a spanking bit in this book that could be contained to eight lines nicely.

So in this bit, Danny and Phillip are getting ready to go to a dinner party. Danny has prepared a Tiramisu to take with them, and he's being a bit of a perfectionist about it, taking time to place each chocolate curl exactly right, instead of getting ready as he should be.

Before he could reach it, Phillip grabbed him tightly around the waist, propped his leg up against the cabinet and bent Danny across his knee—right there in the kitchen. It happened so fast Danny didn’t have time to react.

“Go. Get. Ready!” Each word was punctuated with a thudding smack across the seat of his gray track pants. Just as quickly, he was let up, and whirled around to face a slightly annoyed Phillip. “I thought you said spanking was off the table!” He was surprised at how much force Phillip had managed to pack into those three swats. It took every ounce of restraint he had not to reach back and rub his stinging behind. It hurt a lot more in reality than it had as part of foreplay. 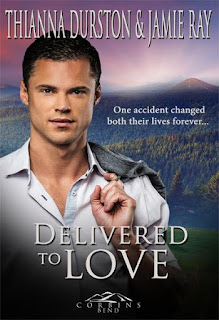 Danny Lawrence used to have a great life. Until his parents found out about him making out with a guy. Now, he’s living in his car while working the same delivery job he’s had since college. One small accident lands him at the Corbin’s Bend Medical Center where he meets Phillip.
Phillip Scott, the new CBMC administrator, has an instant attraction to Danny and when he needs a place to convalesce, offers his own home. Small quarters bring their emotions to the front quickly and things heat up.
Danny’s past rockets back in to his life, shaking their rocky foundation. Something needs to give. Will their choices solidify their relationship, or destroy what they’ve built?